How to Use Emoji in Marketing to Drive Engagement They say that a picture is worth a thousand words. Using images in your marketing campaigns can communicate a lot about what types of emotions you’re trying to convey. These days, you can deliver that same level of emotion with a single keyboard click.

Whether your audience is young and hip to the latest internet trends, or are take a more traditional approach, emoji have a place on a variety of marketing channels.

Let’s talk about what emoji are, where they came from, and how to use them in every aspect of your marketing campaigns.

Even though they gained mainstream popularity within the last decade, Emoji were first created in the 1990s by a Japanese marketing agency. Originally, they were used as a derivation of standard typographic emoticons that were popular on the internet at the time. These images gave personality to the emoticons and added another level of self-expression to online communications. In 2011, Apple made the emoji a permanent part of their iOS 5 keyboard, launching the little faces into the spotlight.

Today there are 1,620 emoji in the iOS keyboard with new ones joining the lineup every year.

The emoticons of the ’90s inspired the idea for emoji but the two words still represent two different sets of characters. You create emoticons by using certain keyboard characters to create a face that adds emotion to the text. Emoticons look like this:

Emoji are small images made up of pixels used to depict a variety of faces, activities and objects. New emoji are designed every year and added to the keyboards of your favorite smartphones.

Emoji add more depth and realism to the emoticons that came before them. Popular emoji range from everything from a kissy face, a slice of pizza, airplanes and more. Emoji can be customized to feature a variety of skin tones, hair colors, and textures.

Why use emoji in marketing?

If you follow a lot of brands on social media, you’ve noticed that more and more of them are using emoji in their messaging and branding. According to a study by WordStream, using an emoji in a Tweet can increase engagement by 25% compared to messages without emoji. Using an emoji in your Facebook posts can increase shares by 33% and interactions with your post by 57%.

Beyond these statistics, emoji can also help to make your brand more relatable, add context to your messaging, and appeal to the emotions of your audience on a deeper level.

When your audience trusts your brand, they’re more likely to recommend you to others and become long-term supporters.

Using emoji in your messaging can add an extra level of personality and relatability to your brand. You can humanize your brand and relate to your audience by speaking their language with the emoji they use daily in text messaging, chat and personal social posts..

As an investment bank, Goldman Sachs is not known for having a youthful vibe. But that didn’t stop them from showing off another side of their personality and appealing to a younger audience by sending out a tweet made up almost solely of emoji that tell a narrative on their own.

On more professional platforms like LinkedIn, using emoji can help your brand stand out in a sea of text posts.

Rather than using them to communicate, you can create more eye-catching lists, or emphasize your posts and headlines with symbols.

Before sticking a bunch of emoji in your messaging, get to know your key demographic and who it is you’re targeting. While emoji can be a great way to humanize your brand, overdoing it or using emoji that don’t appeal to your audience can also alienate them when you don’t do the proper research.

Why do people use emoji to communicate with their friends and family? They’re fun and engaging! Emoji can create a massive boost in engagement for your brand when used correctly.

It’s clear that something about an emoji makes people want to engage–they stand out among text posts and have a friendly, casual appearance. Plus, many social platforms now support searching by emoji so they’re more universal than images and video and let both users and marketers tap into themed conversations, similar to hashtags. Sprout’s own filtering options also let you search by emoji in your Inbox or social listening.

Push notifications that incorporate emoji can get up to 85% more opens and 9% more conversions than text-only notifications. No matter what channel you’re using, adding the right emoji can boost engagement and lead to a higher conversion rate.

Using emoji in your marketing copy can also add extra context to your messaging. In the same way that an exclamation point can change the tone communicated by your message, adding an emoji can convey emotions that you can’t do with text alone. Social media emojis won’t replace good copy, but the two can work together to add more depth and meaning to your words.

On platforms like Twitter, where you have a limited character count, using emoji can add extra context and emotion to your message when you can’t use extra words. 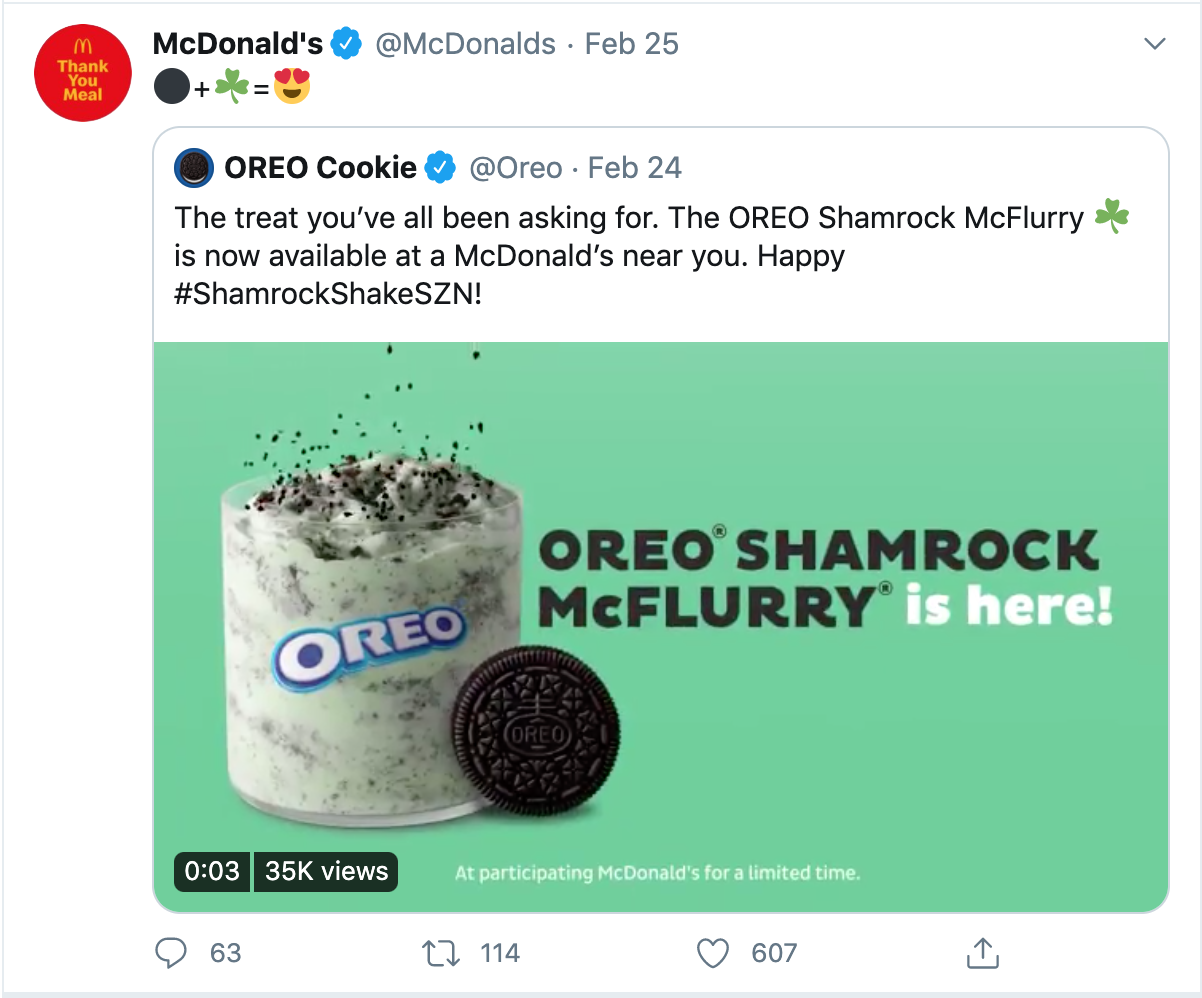 You might be eager to rewrite all of your messaging to include emoji, but it’s important to understand your audience to make sure you’re approaching emoji use in the right way. Your audience demographics will play a huge role in how and when you should use marketing emoji in your campaigns. Demographics will also impact the types of emoji that perform well with your target audience. Get to know your target audience through research and analytics and be sure your emoji-enhanced message matches up with what they like to see on social before using emoji for their own sake.

The marketing channels you use will also impact your use of emoji. Formatting like spacing or line returns can create variation in how posts display between mobile and desktop. Plus, different mobile families have their own display style for emoji, meaning the same emoji could have different connotations when viewed on different devices. Test and preview to be sure your message comes across the way you want and without display errors on every device and platform.

Emoji and social media complement each other perfectly. People use emoji every day to spice up their social media content and interact with their friends’ posts. There’s no reason your brand can’t do the same thing. When incorporating emoji in your social media posts, do so intentionally and with engagement in mind.

Use emoji as a way to add extra context to your messaging, or to add emphasis to the text in your post.

Asking your followers to interact with your post using an emoji is an easy way to encourage engagement. It can be as simple as asking your followers to agree or disagree with a statement using the 👍🏼 or 👎🏼 emoji.  You can also ask a more open-ended question, like “what’s your favorite animal? 🐶🐱🐸🐴🦉” and let them use emoji to get creative with their response.

Facebook believes in the power of emoji so much that it created its own emoji system, called reactions, to promote engagement. These are even quicker for your audience than typing in an emoji, since you can react with these custom icon with one tap or click, just as you would to Like a post.

Using emoji in your social media posts will drive engagement on its own. Asking your followers to interact with your post in a fun and creative way will boost that engagement even more.

Emoji aren’t exclusively reserved for public-facing channels like social media, even though it’s more prevalent on those channels. Incorporating emoji into your email marketing campaigns has shown an increase in engagement and open rates as well.

When using emoji in your email marketing, use them to emphasize a particular point, but don’t use emoji to replace text. Different email providers might display emoji differently so it’s important not to rely on emoji to get your message across. Some subscribers might be using an email provider that doesn’t support emoji as well as others. Your message may end up lost in translation if it relies too heavily on the emoji. Always test your emails to see how they look in different browsers and with providers to be on the safe side.

Just as with your social media posts, using emoji in your paid ads can increase engagement for your ads.

Adespresso wanted to test the theory that Facebook Ads with emoji received a higher click-through rate than those without. To test this, it created two ads. Everything about the ads was identical except that one ad featured an emoji in the headline.

After A/B testing these two ads, it found that the ad with the emoji in the headline saw a 241% higher click-through rate than the non-emoji ad.

At Sprout, we also saw positive results for using emoji in our own LinkedIn advertising. Out of two ad variations using similar copy, the one using emoji brought in 84% of all downloads on the linked content, and it had a 400% lower cost per lead than the variation without emoji.

Before adding emoji to your marketing strategy, ask yourself if it aligns with the tone of your brand. Also, make sure that you do the research to find out the meanings of different emoji before you use them. The last thing you want is to advertise healthy produce only to find out the emoji you chose has an entirely different meaning on the internet.

It’s important to understand who your audience is, to know how they’ll respond to emoji marketing. Just because you see other brands using emoji doesn’t mean that the same strategy will work for you. Learn about where your audience is most active, and how they engage with your existing posts. That information can help you figure out an emoji marketing strategy that makes sense for you. Check out our free social media toolkit to learn more about how you can engage with your audience on social media and which platforms will work best for your brand.