Social networks have transformed marketing and, as this post shows, their popularity is still growing in our latest global social media statistics research summary 2020. Networks vary in popularity with different demographics and they’re still evolving. Research by Global WebIndex that we reference in this article shows that globally,

Social media users are now spending an average of 2 hours and 24 minutes per day multinetworking across an average of 8 social networks and messaging apps.

Just five years ago TikTok hadn’t launched, but now it features in our top 10 of the most popular social networks. Understanding these differences in popularity of different social networks is important when targeting specific audiences.

This post uses statistics from different sources to answer these key questions which are important to understanding consumer use of social networks:

We’ll keep this post updated during 2020 as the latest statistics are published drawing on our recommended top 10 digital marketing statistics sources. We’ll be pointing to new data on the popularity of social media from Global Web Index (worldwide), Pew Internet Surveys (US) and OfCom (UK).

Q1. What is the overall popularity of social media compared to internet use globally?

Each year, near the start of the year, Datareportal update their massive global compendium of stats which gives some great insights into the world of social media. It’s a great download for including slides for your presentations. It’s particularly interesting how far some countries are diverging in terms of social media use, and surprising that Western Countries are lagging a fair way behind in adoption rates.

Some of the key takeaways from their Digital 2020 Global digital overview published on the 30th January 2020 are:

The full report from Datareportal contains a huge amount of insight collated from different data providers across 200+ slides. It provides country-specific data for the vast majority of the world, so you might want to check out the slides of the countries in your core markets to get a better idea of the current state of social in the areas you operate. In this post, we focus on the social media data which starts at around slide 75 in the report.

This chart summarises the importance and growth of social media. A standout figure relevant to marketers from this chart is the 99 percent of total social media users accessing via mobile at some point.

A summary of global social media users around the world

When comparing the most popular social networks it’s best to review them by active account usage, not just the number of user accounts. 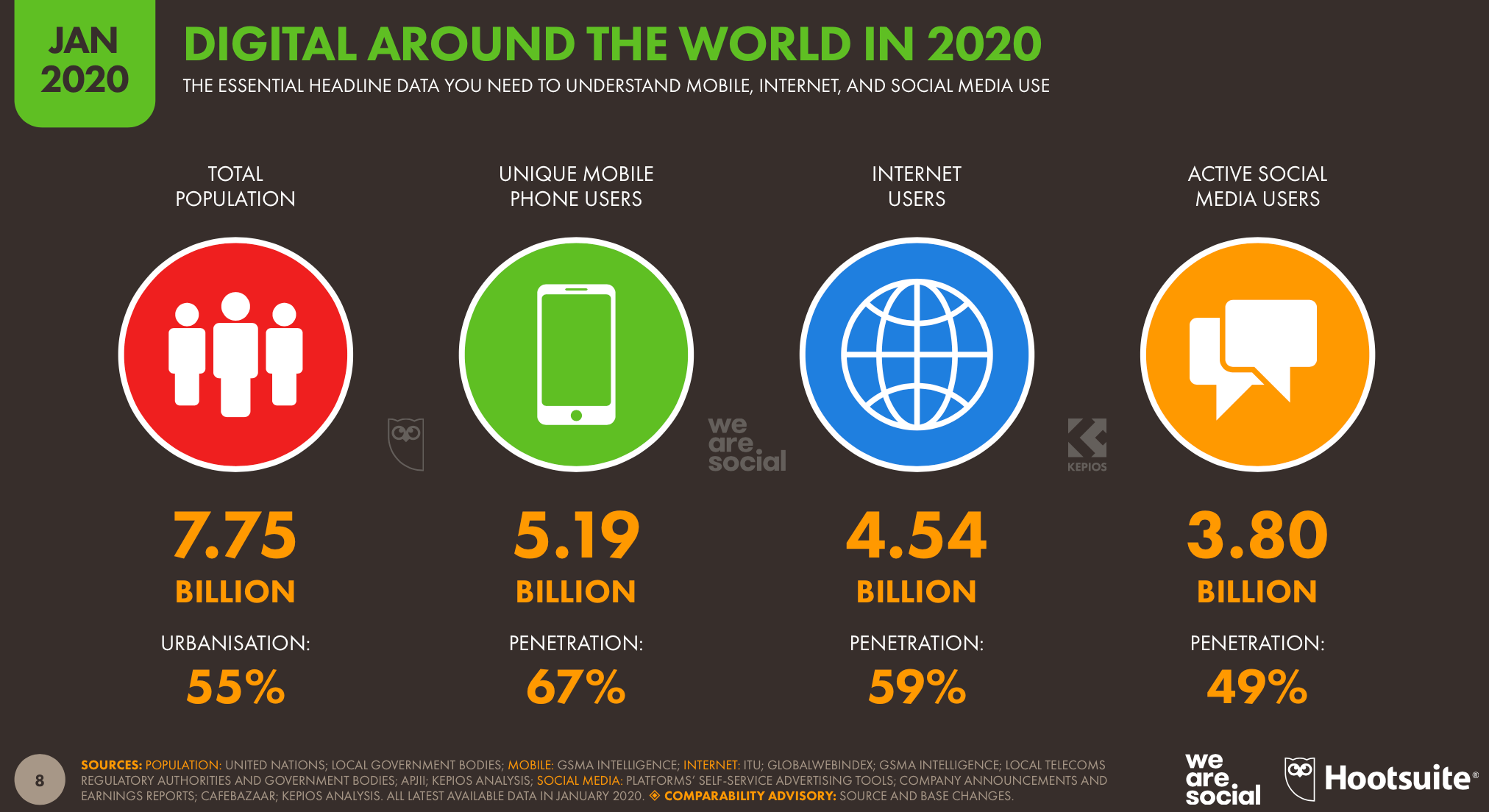 Analysis of regional use of social media shows the wide variation inactive social media penetration reaching 71% in Eastern Asia, 69% in North America, 67% in Southern America and 67% in Northern Europe falling to 59% in Western Europe, 39% in Northern Africa and 6% in Middle Africa.

Q2. Which are the most popular social networks?

The best source for the most popular social platforms is direct from company statements and earning announcements. Kepios has summarized these as follows: 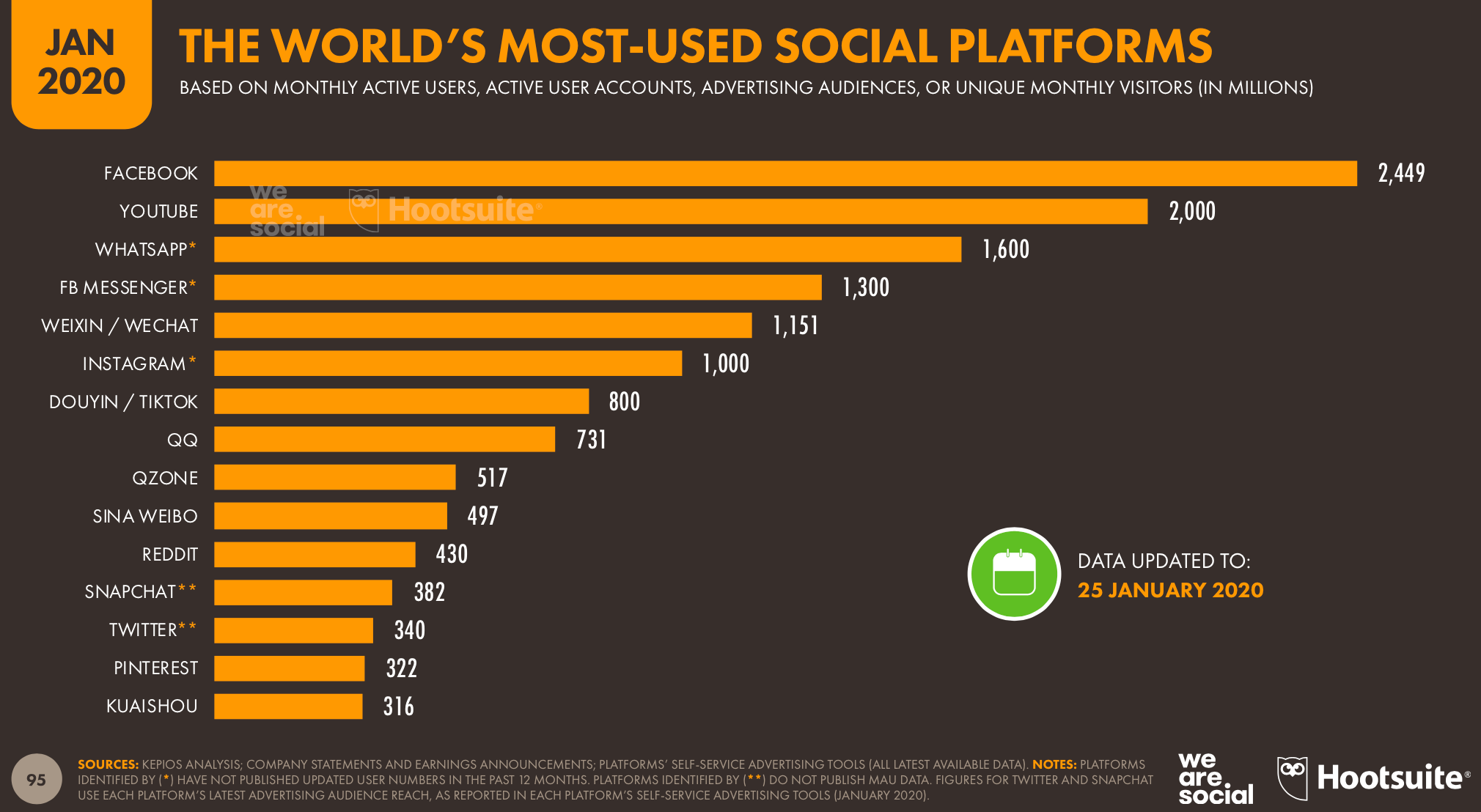 This compilation shows the importance of messenger applications like WhatsApp, Facebook Messenger and WeChat. It also highlights the rapid growth of Tiktok to become one of the main social networks. Note that Reddit, which is not discussed as much as Twitter has more monthly active users than Twitter and Pinterest. It has expanded its advertising programs recently and can be useful for reaching audiences discussing activities such as gaming.

In the United States, the Pew Internet Social media fact sheet is a good source showing trends in usage. It shows a similar pattern to the Kepios data, with Facebook and YouTube dominant, but also includes LinkedIn, which as a network for business professionals is used by around one-quarter of the US population. 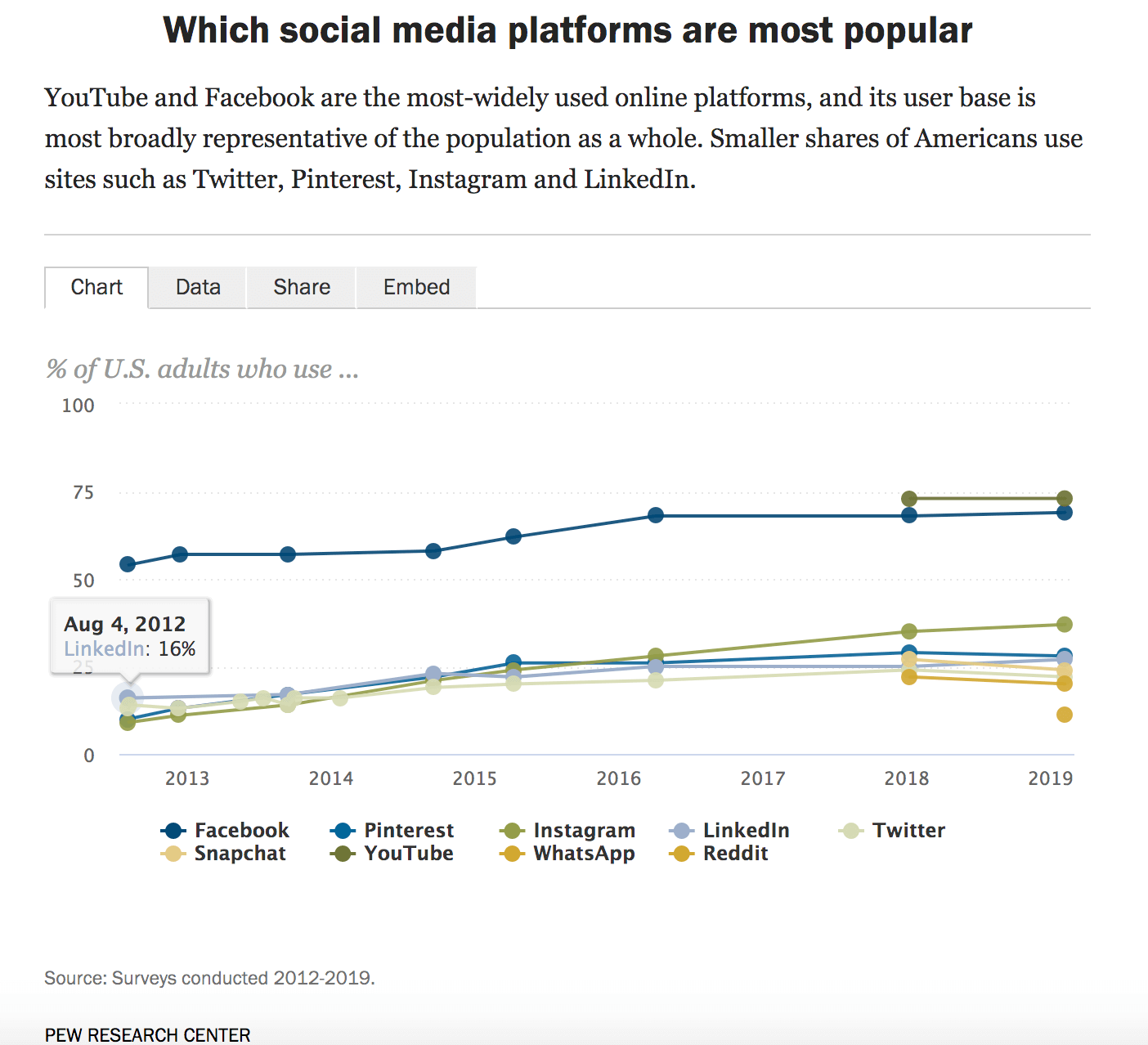 Pew also covers the popularity of the social networks across Age, Gender, and education: 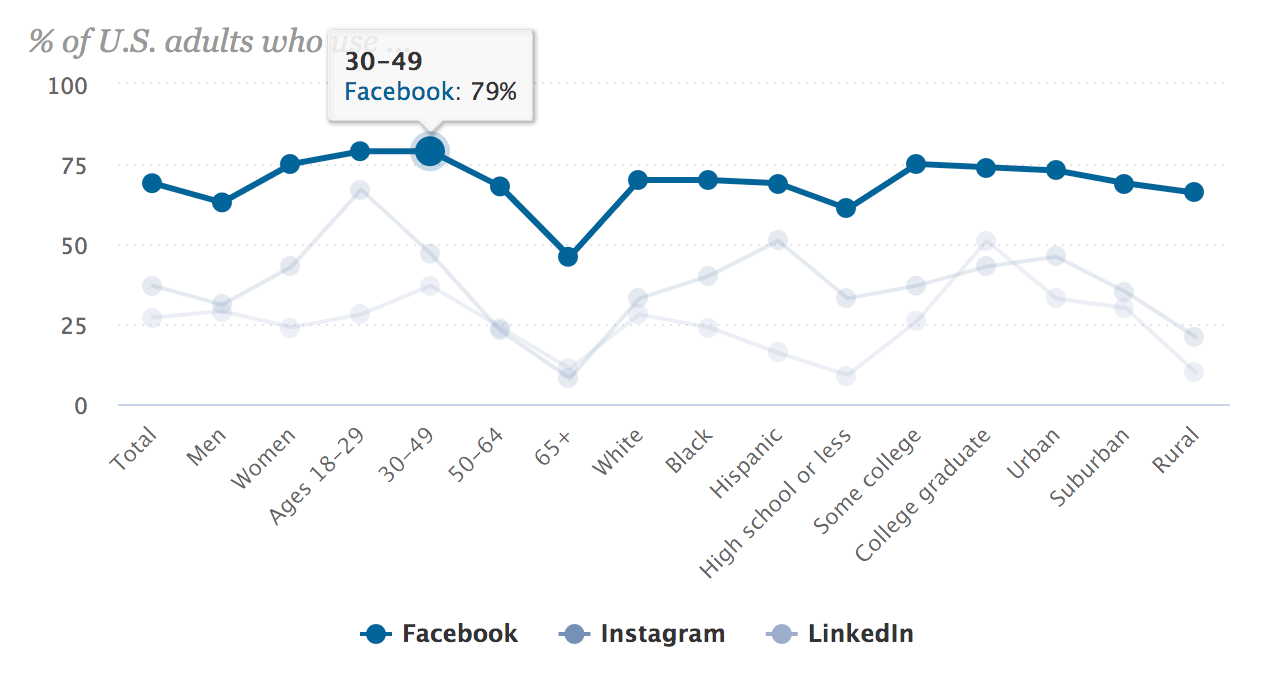 A 2019 Children and parents: media use and attitudes report published by OfCom (UK) is interesting if your business is involved in marketing to children or youth markets or you want to understand future adult use of social media. It highlights the continuing decline of Facebook use by younger demographics with 12-15-year-olds with a Facebook profile decreasing from 40% in 2017 to 31% in 2018. Instagram increased from 14% to 23% in the same period with Snapchat fixed at 31%.

Here’s a snapshot of two of the four age groups featured. 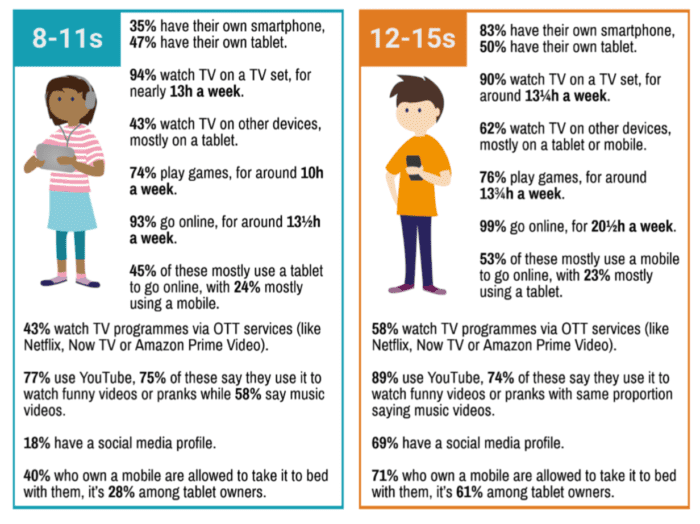 Q3. Which are the fast-growing social networks?

Every marketer has limited time for social media marketing, so which fastest growing social network should you focus your efforts on?

With the ‘Rise of Social media‘ interactive tool from ‘Our World in Data’ you can see the growth of the main networks: 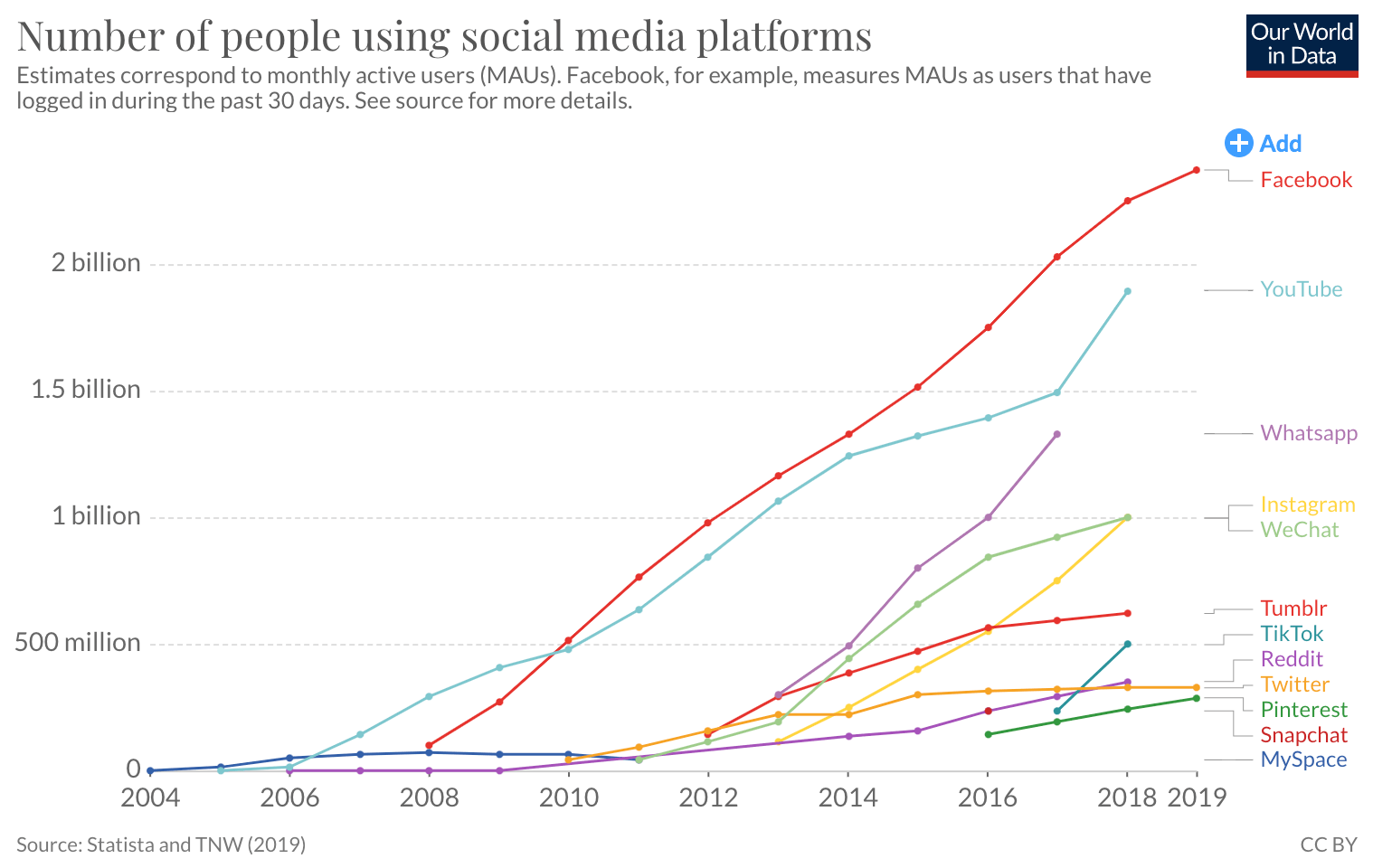 Q4. How do social users interact with brands when selecting products and services?

One of the challenges of social media marketing is that by its nature, social media are peer-to-peer, involving conversations between friends, families and colleagues. Given this, brands must be sensitive to how they use social media.

The research from GlobalWebIndex in their social media trends 2020 report shows how social media informs purchase decisions. It shows that younger age groups are particularly keen on researching products online via social networks. Both organic and paid posts from businesses can help support this process. 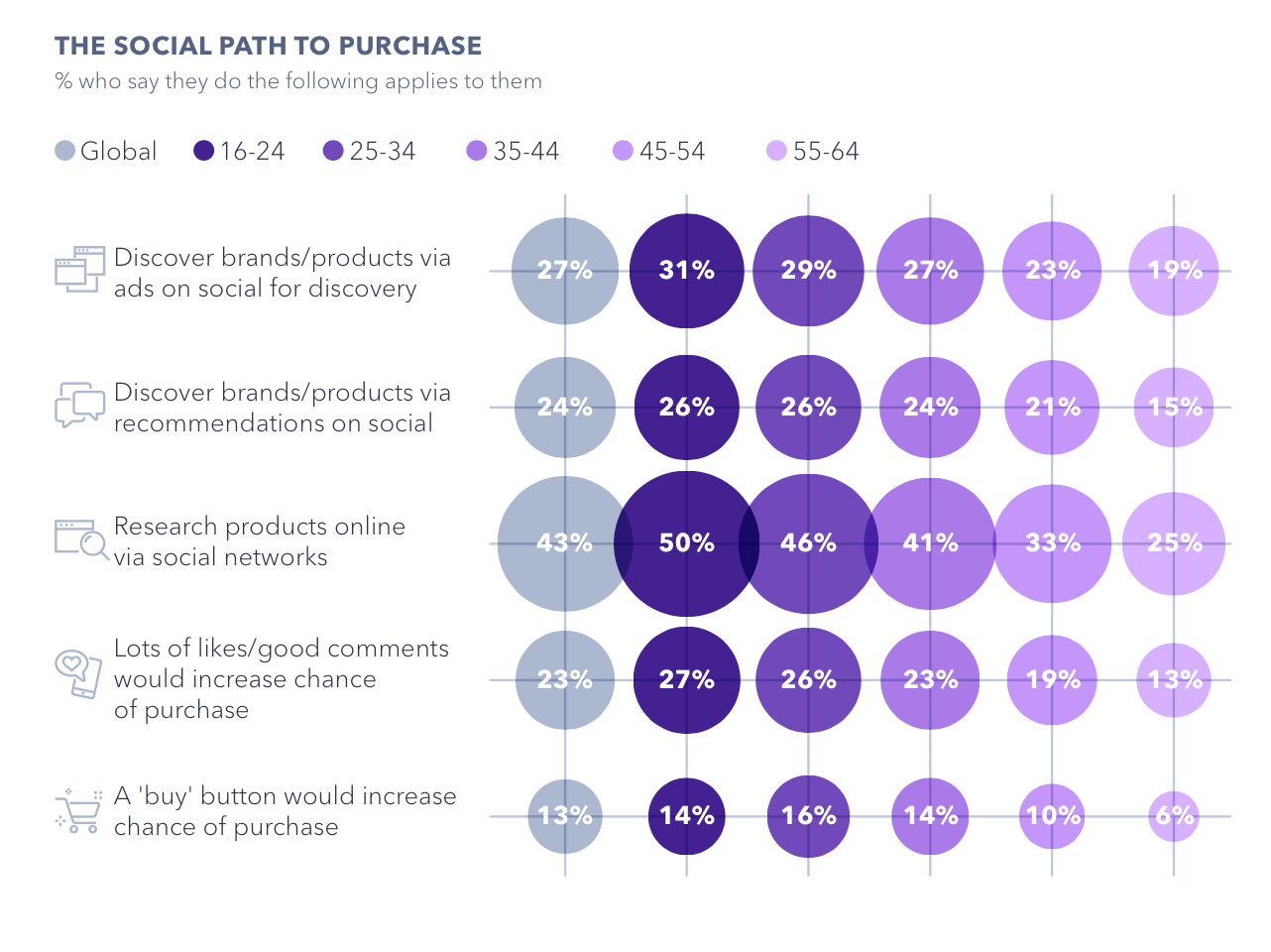 Global WebIndex asked 284,929 internet users aged 16-64: How do you typically find out about new brands and products? | Which of the following online sources do you mainly use when you are actively looking for more information about brands, products, or services? | When shopping online, which of these features would most increase your likelihood of buying a product?

Q5. What are the benchmarks for different engagement rates in social media?

Overall, digital consumers are now spending an average of 2 hours and 24 minutes per day on social networks and messaging apps according to Global Web Index.

GWI explains that the growth in social media use is partly due to multi-networking which is a response to the widening choice of platform and it’s also being caused by a degree of specialization, where some users are turning to particular platforms to carry out certain types of networking behaviors such as Twitch, Pinterest, and TikTok.

Social media users are comfortable maintaining a presence across several platforms;
while the average internet user had about 6.2 social media accounts in 2015, the figure has risen to nearly 8 in 2019.

Here is a sample of reports. 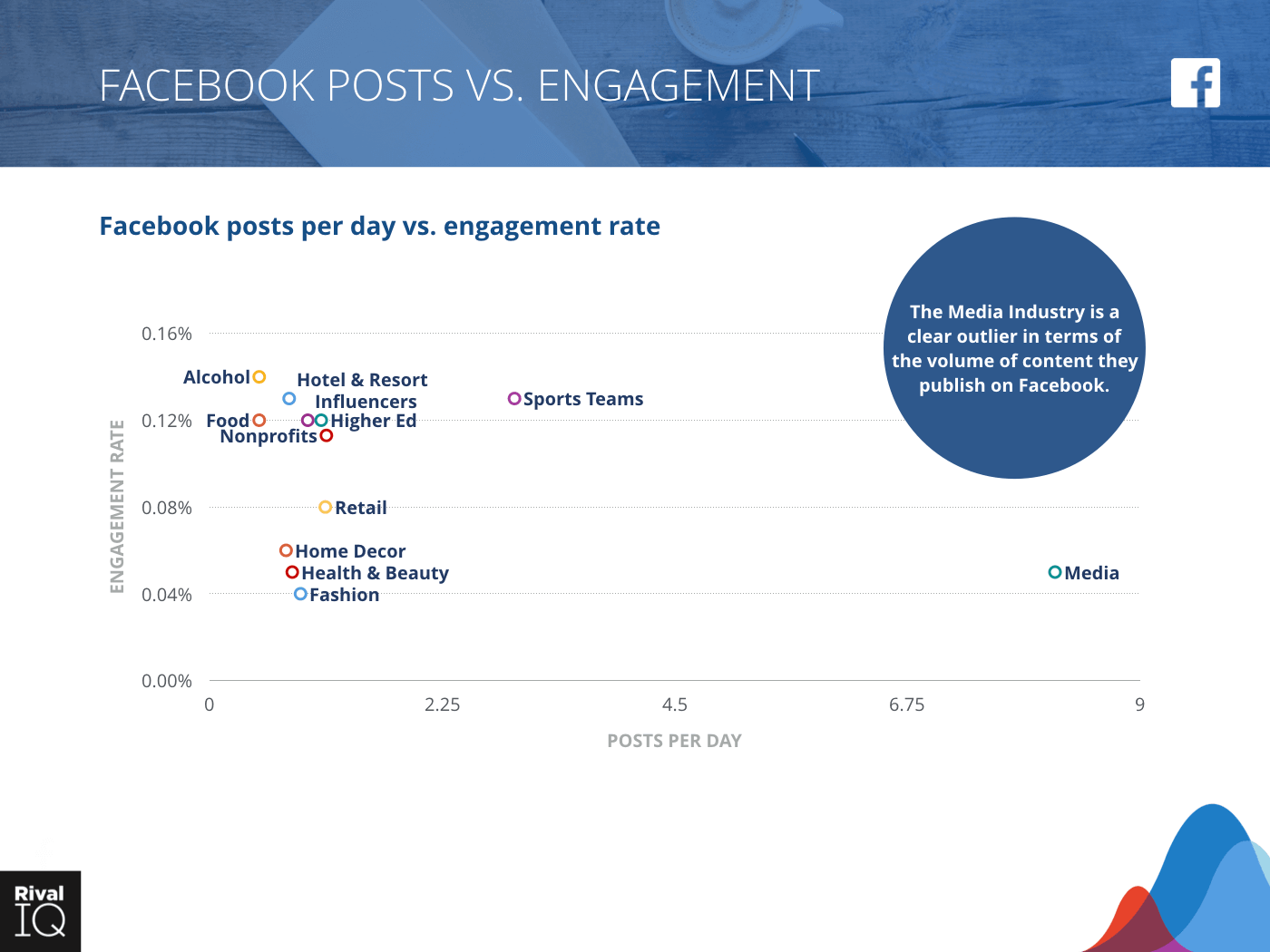 Typically, on Facebook, each post has engagement rates below 0.2%. Typically most businesses have fewer than two posts per day. 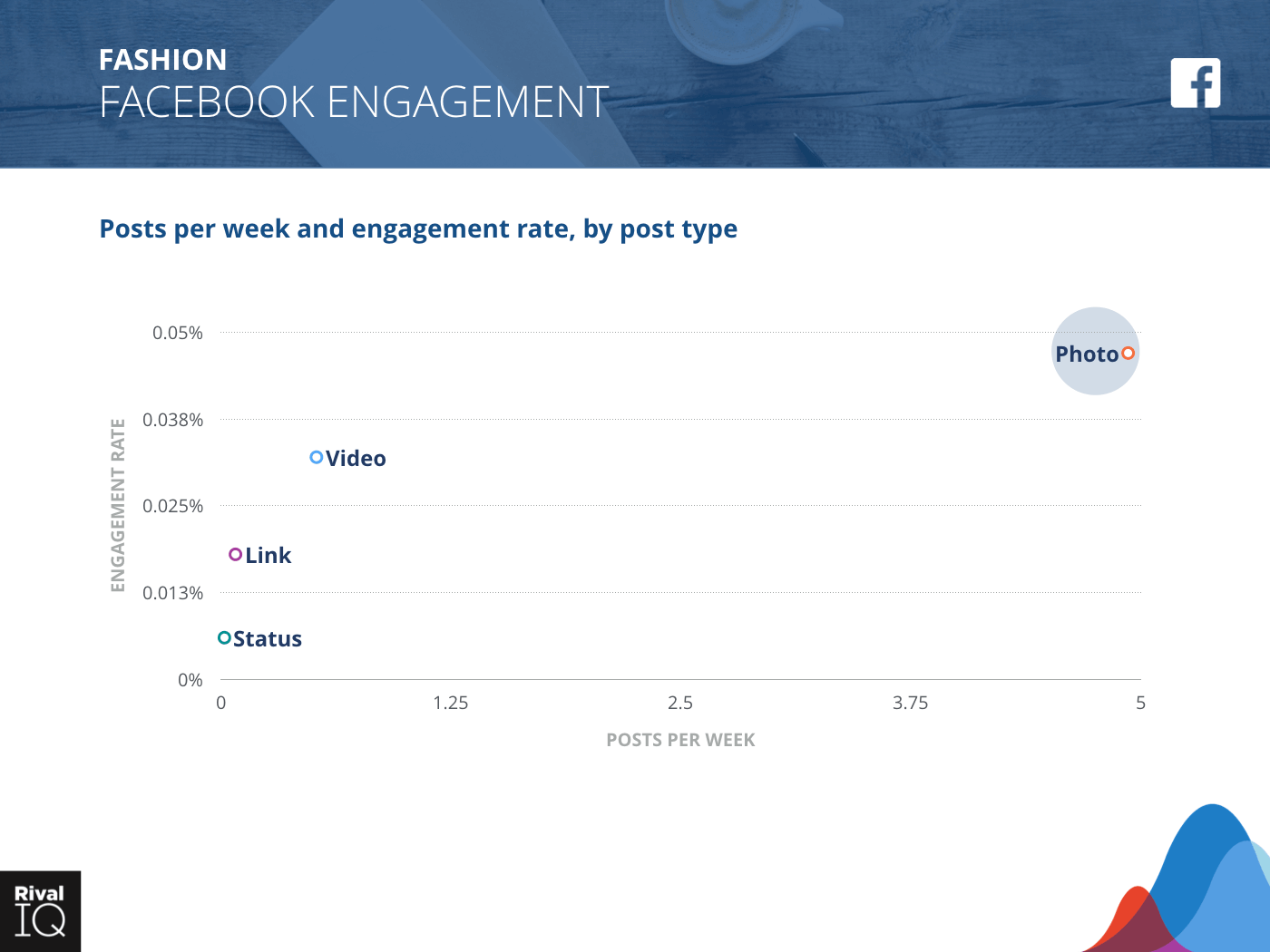 Photos are a popular format on Facebook and gain the most engagement. 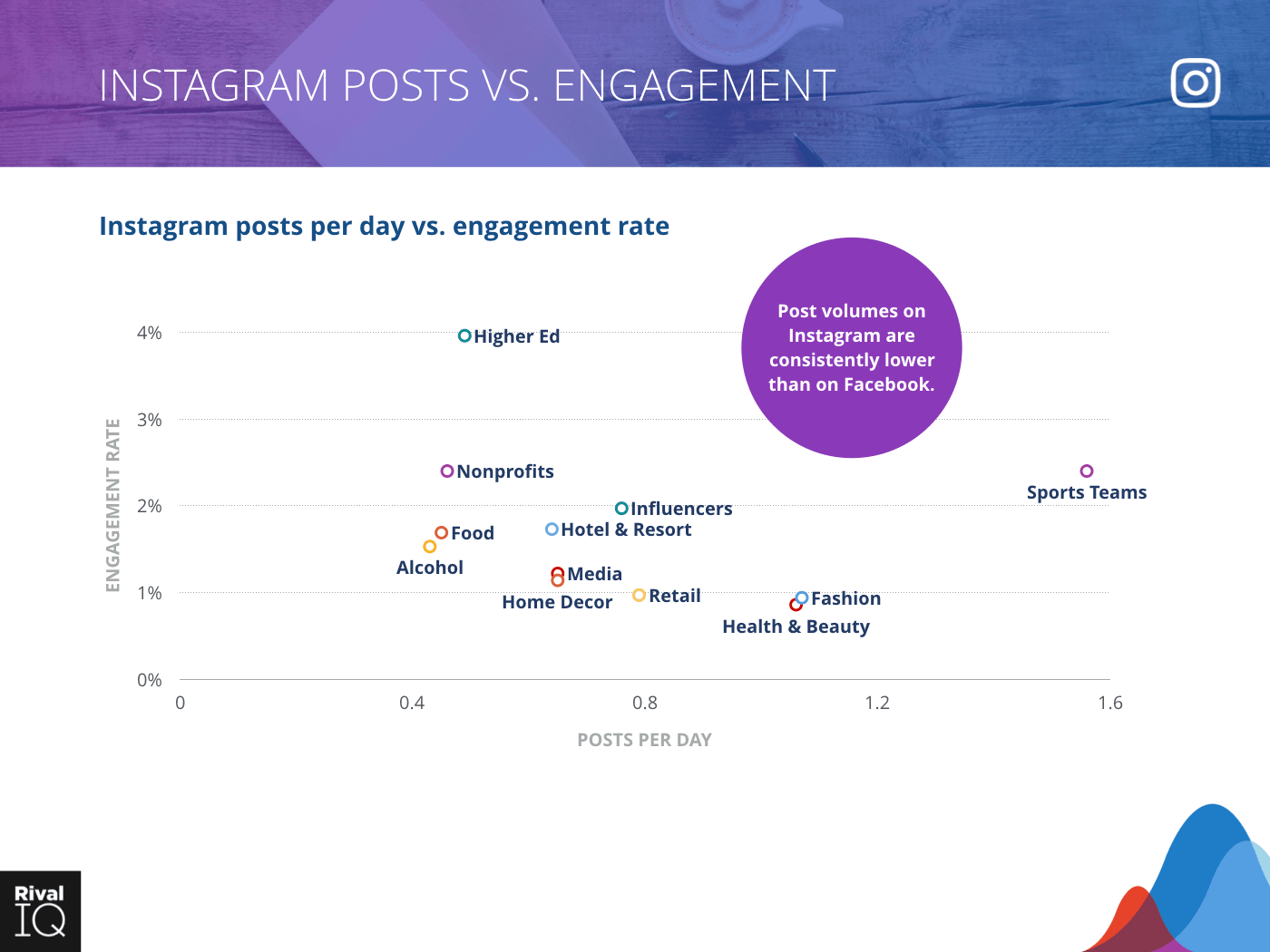 Engagement rates are significantly higher on Instagram compared to Facebook, but there tend to be fewer posts per day. 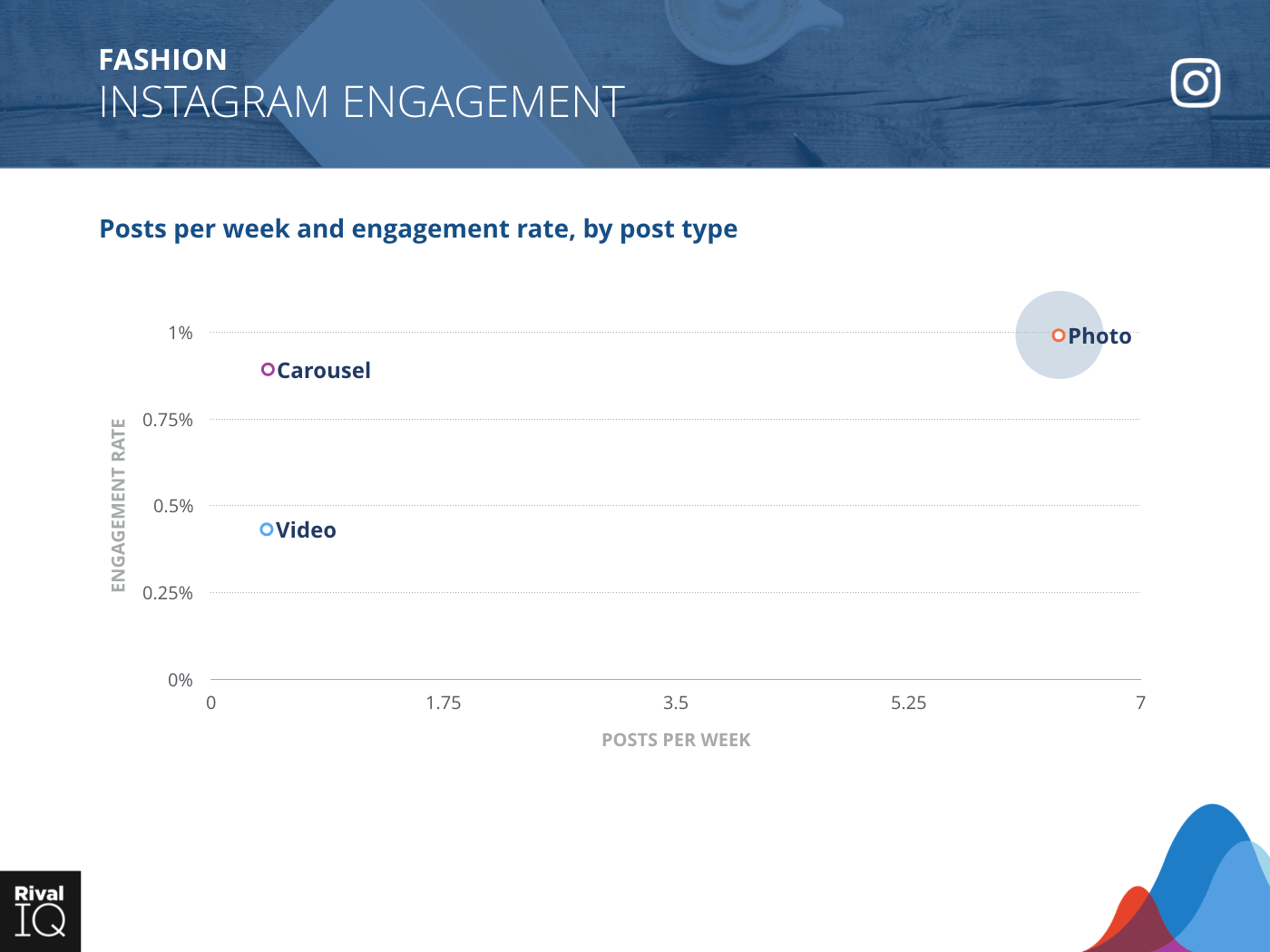 As might be expected, the Fashion sector has some of the highest engagement rates and post frequency.